A new film being launched by a Yorkshire cancer charity wants to turn around the growing mistrust surrounding vaping and e-cigarettes. The group says that the misinformation is inhibiting efforts to save lives. 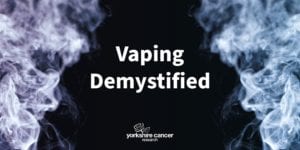 The 30-minute documentary “Vaping Demystified” was commissioned by Yorkshire Cancer Research (YCR) and launched on No Smoking Day (March 10). The film features interviews with several tobacco harm reduction experts in the hopes of fixing the falsehoods surrounding vapor products.

Martin Dockrell, tobacco control lead for Public Health England (PHE), for example, discusses a PHE study that found vaping to 95 percent safer than smoking combustible cigarettes, according to a story in the Yorkshire Post. “We have been following the evidence about vaping as it has been evolving, and what has become increasingly clear is that vaping is far less harmful than smoking and perhaps twice as effective as licensed medicines at helping smokers to quit,” he said in the film.

The film details studies that show there is an increasing mistrust of vaping, with the proportion of those who think it is less harmful than cigarettes falling from 45 percent in 2014 to 34 percent in 2019. In 2019, the e-cigarette or vaping product use-associated lung injury (EVALI) cases hit the headlines globally. EVALI was found to have been caused by black market THC vapes that contained vitamin E acetate, and had nothing to do with e-cigarettes like many media reports had claimed.

Stuart Griffiths, director of research at YCR, said by the time the true cause had been found, the media cycle had moved on. “We didn’t see any of these vaping injuries that the US saw,” he said. “It got a lot of coverage – but the end of the story never really came out, that it was a consumer product that had been tampered with.”